Targeting Cells in Autophagy Process May Be Path to Halting Fibrosis 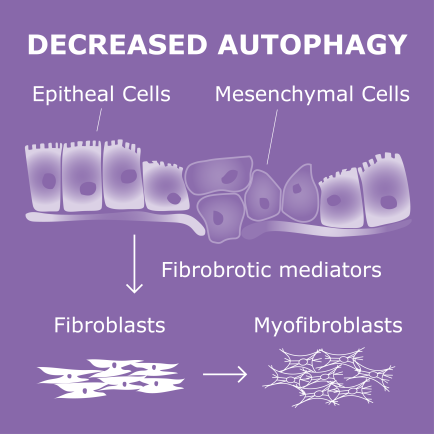 Aging is a risk factor for idiopathic pulmonary fibrosis (IPF), as the incidence of the disease is known to increase with age. Aging carries detrimental effects to several cellular mechanisms, including the cells’ autophagy.

Autophagy is a natural mechanism used by cells to deliver malfunctioning or damaged cellular components for destruction in acidic vesicles called lysosomes. Analysis of tissue from IPF patients has shown that the autophagy response is impaired in these patients.

However, it remains unclear whether faulty autophagy exerts an effect directly, or if this change is merely coincident with IPF.

To address this question, researchers at the University of Southampton, U.K., investigated whether autophagy activity is impaired in IPF tissue samples. Their study, “Autophagy inhibition-mediated epithelial–mesenchymal transition augments local myofibroblast differentiation in pulmonary fibrosis,” was published in the journal Cell Death & Disease.

They treated the cells with an autophagy inhibitor, called hydroxy-chloroquine, and saw that the treatment changed the cell’s behavior; specifically it activated the so-called epithelial-mesenchymal transition. EMT is a process by which epithelial cells gain migratory and invasive properties to become mesenchymal stem cells. EMT plays a critical role in the development of pulmonary fibrosis.

Researchers then tested another autophagy inhibitor, called bafilomycin-A1, and again saw that blocking autophagy triggered EMT. The same happened when they used a molecular approach and decreased the levels of key autophagy genes.

The team then investigated whether autophagy inhibition-induced EMT in alveolar epithelial cells contribute directly to the fibroblast cell population that release extracellular matrix (ECM) components that contribute to fibrosis. In IPF lungs, increased ECM deposition leads to decreased lung compliance and disrupted gas-exchange. The researcher found that EMT activation in these alevolar cells with inhibited autophagy did not enhance their ability to produce (ECM) components.

They found that these cells secreted factors that promoted fibroblasts’  transition into myofibroblasts, the cells responsible for the synthesis and buildup of scar tissue (fibrosis).

Targeting of EMT “might have therapeutic potential in fibrotic conditions,” the team suggested.