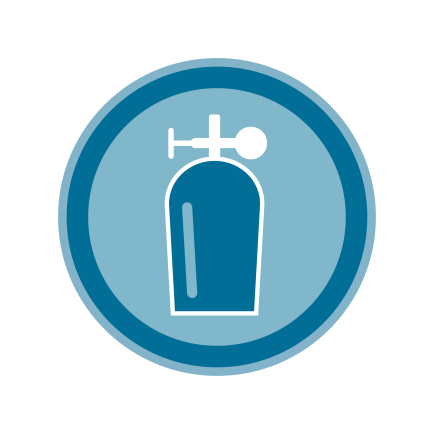 A person with IPF qualifies for oxygen therapy if the oxygen saturation falls below 88% at rest (while sitting still). In that case, oxygen should be used all the time. Sometimes the oxygen saturation is above 88% at rest but falls below 88% when moving around or during sleep. When that happens, the person qualifies for oxygen therapy to be used when moving around or during sleep.1

How will the doctor know that I have low oxygen saturation?

Oxygen saturation is easy to measure using a small device called a pulse oximeter (also called a “pulse ox”). Many pulse oximeters are meant to be used on the tip of a finger. The small device shines a light from a light source that stays cool to the touch. The light shines through the fingertip, making the fingertip glow red. The device can analyze the light as it shines through the fingertip. Changes in the way the light is absorbed through the finger tissue allow the device to measure oxygen saturation. No needles are required, and the device is completely harmless and painless. Pulse oximeters are used at the doctor’s office or clinic, and can also be purchased inexpensively to use at home.

Is it harmful to have low oxygen saturation?

Yes. Low oxygen saturation means that the blood is not carrying enough oxygen to keep all the body’s tissues healthy. In medical terms, this is called “hypoxemia” (high-pox-EE-me-ah). Hypoxemia can cause the following problems2:

No. There is no cure for IPF at this time.

Only one study has been done on this question.3 The study is nearly 20 years old and was done before modern medications for IPF were available. The data from the study may not be very useful for patients today.

In that study, researchers reviewed the clinical records of 487 patients with IPF who were seen at Mayo Clinic Rochester. Oxygen therapy was advised in 133 patients. Those 133 patients also may have received no other treatment, or treatment with medications that are no longer used today (colchicine, prednisone, or colchicine plus prednisone).

The researchers looked at survival time in each of the groups. Age, gender, and severity of lung disease at the start of the study were taken into account. The researchers found that there was no significant difference in survival between those on oxygen therapy and those without oxygen therapy.

Further studies in modern patients would help answer the question of whether or not oxygen has any effect on survival. Right now, it seems like oxygen does not help or hurt survival time, but more studies are needed.

Will oxygen therapy help with my symptoms of IPF?

Survey studies of people with IPF on oxygen therapy generally show that oxygen therapy can help many patients with their mobility and their ability to do chores around the house. Most people feel less tired as well.4-6

Studies about the effects of oxygen therapy on breathlessness have had mixed results.6

Will I become dependent on oxygen therapy?

No. It is not possible to become dependent on oxygen therapy. Oxygen therapy is meant to improve some of the symptoms of IPF, such as fatigue and inability to move about without resting. Oxygen therapy does not change the progressive damage to the lungs that happens in IPF.

Another reason that some patients may mistakenly think they have become dependent on oxygen therapy is that the amount of oxygen needed usually increases over time. In other words, a patient may start out needing a small amount of oxygen, but the patient needs a larger amount as weeks and months pass. This happens because the lung damage (scarring) caused by IPF itself gets worse over time, with or without oxygen therapy. More oxygen is needed because the lungs are becoming more and more damaged by the disease.

What are the downsides of oxygen therapy and how can I manage them?

Survey studies4,8 of patients with IPF on oxygen therapy have found the most common complaints to be:

It is important to reach out for help if things are not going well with your oxygen therapy or your equipment. Do not be afraid to tell your doctor, nurse, or respiratory therapist that you are struggling and need more help and support. Over half of patients with IPF report that they have problems with their oxygen therapy8, so you are not alone.