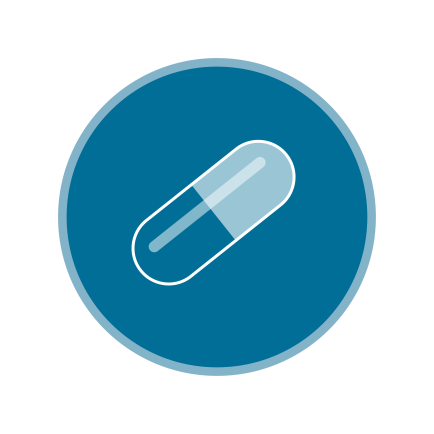 Pirfenidone and nintedanib have been shown in clinical trials to slow the rate of lung damage for people with IPF. These medications do not cure the disease. They do not reverse lung damage that has already happened. Importantly, they do not improve cough, breathlessness, or fatigue in a meaningful way. People with IPF who take these medications do not usually feel any different. The benefit of these medications is that they increase the chance of a longer time with a slower rate of decline in lung function.1

How Do They Work?

Scar tissue cells (fibrotic cells) in the lungs of patients with IPF have a protein called collagen in them at much higher amounts than is normal. The collagen forms bundles inside the cells (“collagen tendrils”). When cells have many collagen tendrils, they become stiff and hard.

Nintedanib and pirfenidone are very complex medications. Researchers believe they may slow the disease process in IPF down in several ways. Slowing down the formation of collagen tendrils is one way. Other ways are currently under study.

How Are They Taken?

Nintedanib is taken by swallowing 1 pill (150 mg each) 2 times every day with food.5

What Are the Possible Side Effects?

The most common side effects of nintedanib are diarrhea, nausea, stomach pain, vomiting, liver problems, decreased appetite, headache, weight loss, and high blood pressure. Uncommon side effects are an increased risk of bleeding, blood clots in the arteries, tear in the wall of the stomach or intestines (guts), stroke, or heart attack. Nintedanib is dangerous for a fetus or baby, so women who are taking it should not become pregnant or breastfeed.7

It is very important for people with IPF who take these medications to be honest with their doctor about how they are feeling. Side effects can be managed only if a doctor knows about them. Do not stop taking the medications before talking to a doctor.

The clinical trial that led to FDA approval for pirfenidone was called the ASCEND study.8 In the study, 555 patients with IPF were randomly put into one of two groups (a “randomized trial”). The first group of 278 patients took pirfenidone by mouth with a meal three times per day. The dose was 801 mg each time (a total of 2,403 mg every day). The other group of 277 patients took the same number of placebo (sugar pills) of the same color, size, and shape on the same schedule every day. Neither the patients nor the researchers knew which patient was in which group (a “double-blind” trial). Patients took the medication or the placebo pills for 52 weeks.

Lung damage was measured using spirometry. The key measurement was forced vital capacity (FVC). FVC measures the amount of air a person can exhale with force after inhaling as deeply as possible. The researchers tested the FVC for all patients in the study at the beginning (“baseline”), and at weeks 13, 26, 39, and 52. The measurements showed that treatment with pirfenidone slowed down the average level of lung damage in the group over 52 weeks.

A long-term follow-up study was done that looked to see if patients whose lung function got worse while taking pirfenidone would benefit if they continued to take it for another year. That study found that there was benefit to taking pirfenidone for a second year, because the FVC measurement got worse more slowly than would be expected for a person with moderate or severe IPF who did not take pirfenidone.9

Two randomized, double-blind clinical trials were done that led to FDA approval of nintedanib: INPULSIS-1 and INPULSIS-2.10 The total number of patients in these trials was 1,066. Of those, 638 patients were randomly assigned to the nintedanib group. They took 150 mg of nintedanib two times a day. The other 423 patients were randomly assigned to the placebo (sugar pill) group. They took sugar pills of the same color, size, and shape two times a day. The trial lasted 52 weeks. The measurement used for lung function was FVC, the same as in the ASCEND trial.

The researchers also looked at health-related quality of life. This was measured using the St. George's Respiratory Questionnaire. The questionnaire asks about the frequency and severity of breathlessness. It also asks about activities that caused by or are limited by breathlessness and about social functioning and mood. In INPULSIS-1, there was no difference between the groups in the scores for this questionnaire during the study. This means that nintedanib did not improve breathlessness, social functioning, or mood. These symptoms continued to worsen during the study in both groups.

Do Patients in the Clinical Trials Represent Real-World IPF Patients?

The clinical trials do not completely represent real-world IPF patients.

There have not been any large, placebo-controlled clinical trials that have enrolled patients with severe IPF at the start of the trial. These studies will be needed to fully answer the question of whether the medications give benefit to patients with severe disease who have never taken an IPF medication before.

When Should Medication Treatment Start?

Ideally, medication treatment should begin as early as possible. All of the clinical trials that led to FDA approval for both medications enrolled mostly patients with mild-to-moderate IPF.

Doctors do not always agree that people with severe IPF should receive medication therapy. Some say that any slowing in lung damage is a positive outcome, and that side effects are often manageable.15 Others say that the side effects are not worth any slowing in lung damage for these patients because it is not sure that the medication will be beneficial.16

This is decision that the patient, family, and health care team should make together. The pros and cons of medication in severe disease should be discussed carefully.

Do These Medications Increase Life Expectancy?

Longer-term studies are needed to help answer the question of whether the medications improve survival time.

Is One Better Than the Other?

No clinical studies have directly compared pirfenidone with nintedanib, so it is impossible to say. Both medications had similar benefits compared with placebo in clinical trials.