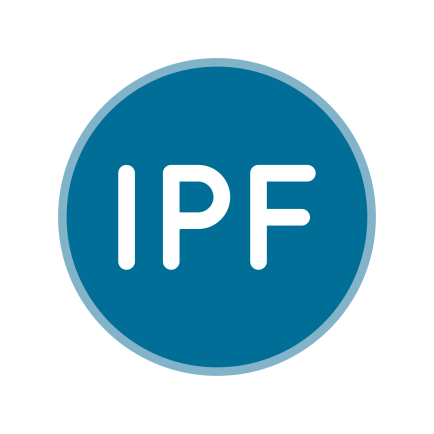 The journey to a correct diagnosis of idiopathic pulmonary fibrosis nearly always begins at the primary care doctor’s office. Although idiopathic pulmonary fibrosis is difficult to diagnose, there is a key sign that a primary care doctor can recognize during a physical examination: Velcro®crackles. When a person with IPF breathes in, very often a doctor can hear an unusual crackling sound through the stethoscope.1,2 This sound is similar to the sound heard when gently separating the joined strip of Velcro on the blood pressure cuff. These are usually heard near the bottom part of the chest. The Velcro crackles can be heard the whole time a person with IPF breathes in.

If Velcro crackles are heard at two examinations that are several weeks apart, this is a strong clue that the patient should be referred to a lung specialist (pulmonologist) for more tests. This is especially true if the patient is 50 years old or more and has a history of smoking.

The word “idiopathic” in medical terms means “unknown cause”. In IPF, there is no known cause of the condition. Doctors are not sure why the connective tissue around the air sacs in the lung becomes stiff and scarred (fibrotic). There are many theories, but for now, IPF is a diagnosis of exclusion. That means doctors must rule out, or exclude, other conditions in order to arrive at the diagnosis of IPF.

When a person comes in with cough, breathlessness, fatigue, and Velcro crackles, a lung specialist (pulmonologist) will perform tests. These tests will help rule out other lung conditions. The two key tests for IPF are:

What Happens after HRCT?

HRCT is the most important test in the journey to diagnose IPF. People with IPF usually have the typical signs of the condition, which are called signs of “usual interstitial pneumonia” (UIP).

After HRCT, doctors will categorize a patient’s lungs into one of four patterns6:

A patient will be given the diagnosis of IPF if he or she has the symptoms of IPF (cough, breathlessness, and fatigue), plus a restrictive pattern on spirometry, plus the UIP pattern on HRCT.

When HRCT shows a “probable UIP” pattern or an “indeterminate for UIP” pattern, other tests are usually done to make sure the person has IPF.

There are two main tests that are used when a person is thought to have IPF, but the HRCT testing showed a “probable UIP” pattern or an “indeterminate for UIP” pattern6:

A person who has the symptoms of IPF with a “UIP” pattern or a “probable UIP” pattern on lung biopsy will get the diagnosis of IPF.6

A person who has the symptoms of IPF with an “indeterminate for UIP” pattern or an “alternate diagnosis” pattern on HRCT and on lung biopsy is hard to diagnose. In those cases, it is recommended that a team of doctors have a meeting to decide what should happen. This meeting is called a multi-disciplinary discussion.8 The discussion should include a lung specialist (pulmonologist), imaging study specialist (radiologist), and laboratory specialist (pathologist). It may be that the patient is watched for several months and the tests are repeated again. At that time, the results may be more clear.

The Best Outcomes Happen at a Tertiary Center

The best outcomes for patients happen when they are seen at a big medical center or hospital (tertiary center) that specializes in IPF. If you or a loved one have symptoms of IPF, like cough, breathlessness, and fatigue, it is important to make an appointment with a lung specialist (pulmonologist) at a tertiary center. This is especially true if a doctor has told you that there are signs of IPF like Velcro crackles and a restrictive pattern on spirometry.