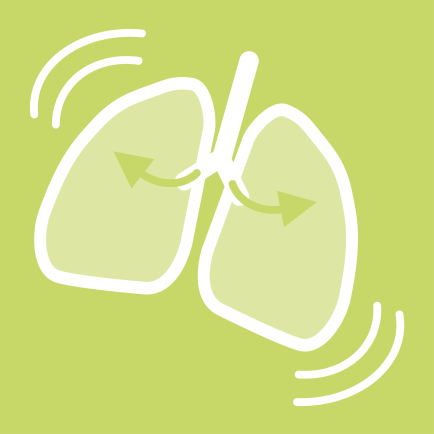 What is mucus and where and why does it form in the lungs?

Mucus is a normal, slippery and stringy fluid that is produced by many lining tissues in the body. It keeps these areas from drying out and helps defend against bacteria and viruses. Mucus in the lungs is actually a good thing as it moves through picking up potentially harmful particles that we breathe in and moving them along and out of the lungs.

The bronchus in the lungs are lined with hair like projections called cilia and move microbes and debris up and out of the airways. Scattered throughout the cilia are goblet cells that secrete mucus which helps to trap microorganisms and protect the lining of the bronchus. This is known as mucociliary clearance which covers most of the bronchi, bronchioles and nose.

There is no cilia in the alveoli, which are are tiny sacs within our lungs that allow oxygen and carbon dioxide to move between the lungs and bloodstream. Alveolar macrophages are present in the alveoli and together with other white blood cells break down bacteria and other microorganisms. They are the lungs last defense against any infectious, toxic or allergic particles that have evaded the mechanical defenses of the respiratory tract.

Alveolar macrophages also secrete numerous chemical mediators when stimulated and they play a role in regulating inflammatory responses. Interstitial lung disease seems to occur when an injury to the lungs triggers an abnormal healing response. Ordinarily, the body generates just the right amount of tissue to repair damage. But in interstitial lung disease, the repair process goes awry and the tissue around the air sacs (alveoli) becomes scarred and thickened. This increased scarring affects the normal function of the macrophages there and can lead to increased mucus in these air sacs.

That is why it is important to use airway clearance techniques that help get air behind these secretions to mobilize them further up the airways so one is able to cough them out.

Why do patients with chronic respiratory disease have difficulty clearing mucus from their lungs/airways?

In addition to the dysfunction mentioned above in the distal airways, mucociliary dysfunction can occur in people with chronic lung disease leading to ineffective clearance of the mucus in the lungs. This is when an airway clearance technique can be introduced to help facilitate clearance.

What factors other than disease affect mucociliary clearance?

What is airway clearance?

Airway clearance techniques (ACTs) are used to clear secretions from the lungs. Secretions, or mucus, that remain in the lungs can prevent full ventilation and can lead to infection.

How often should one perform airway clearance techniques?

Most techniques are recommended to perform at least two times daily if one has known issues with mucus, such as mucus plugging seen on imaging of bronchiectasis. Bronchiectasis occurs when there is damage to the airways in the lungs making it difficult to clear mucus.

How does ACT work?

There are many different forms of airway clearance and research has not shown one form to be more beneficial than another. However, patients tend to need to try a few different methods before settling on the one that works for them. Each airway clearance technique is designed to mobilize secretions centrally so that they can be cleared by a good cough, but each technique has a slightly different mechanism of action. Three common methods are active cycle breathing, positive expiratory pressure, and high frequency chest wall oscillation.

Active Cycle Breathing Technique (ACBT) can be used independently or in combination with other techniques. ACBT has three phases: breathing techniques to relax the airways, thoracic expansion to get air behind and mobilize the secretions, and the force expiatory technique to help get the mucus out of the lungs.

Positive Expiratory Pressure (PEP) involves exhaling through a device via mask or mouthpiece against pressure of 10 cm H2O to 25 cm H2O. Breathing out against this slight resistance both dislodges the secretions and splints the smaller airways open preventing collapse and allowing more mucus to mobilize centrally.

High Frequency Chest Wall Oscillation (HFCWO) or “vest” therapy consists of wearing a vest that inflates and provides external chest wall compressions and vibration. The increased pressure on the chest wall causes an increase in the flow of air out when one exhales, and the vibration creates shearing forces that help shake mucus from the lining of airways.

An effective cough requires a delicate balance between enough force to mobilize secretions, but not too much to create airway irritation and bronchospasm. One way to increase the force of the cough is to perform it leaning slightly forward with one’s forearms supported on a table. This will allow one to use the chest muscles to help produce more forceful cough.

What are other important points to be mindful of?

If one wears oxygen, to be sure to have it on while performing airway clearance techniques, and being sure to breathe through the nose.

It is good to observe the mucus if one is able to clear it. If one is bringing up more mucus than normal or if the color has changed, one can take a picture of it to show it to one’s pulmonologist.