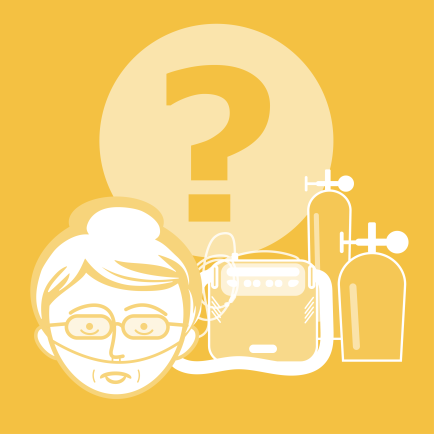 Theme:
From the Perspective of Patients and Caregivers
Posted By:
Aliaa Barakat PhD

This past July, after being treated for chronic obstructive pulmonary disease (COPD) for more than 30 years, Jamie Rice was prescribed oxygen therapy. Her doctor had found her oxygen saturation level — the amount of oxygen in the blood — to be below 88%, the qualification standard for supplemental oxygen.

Adjusting to the idea of being tethered to oxygen equipment was hard for her. But dealing with oxygen suppliers made it even more of a challenge. In fact, she was so riled by the process that she wrote a letter to her congressmen and senators citing her attempts “… to navigate a complicated, confusing, difficult system that appears to have no standards or specifics to providing oxygen.”

Jamie is not alone. Many people with pulmonary fibrosis, emphysema, and other respiratory disorders use extra oxygen to make breathing easier and stay active. And yet, as Jamie said in her letter, “Oxygen, which requires a prescription, is marketed like a commodity to a vulnerable, sensitive, and fragile population in the same way as used automobiles. The Internet is flooded with one ad after another huckstering the best and lowest prices that they ‘aren’t’ allowed to advertise, but are most happy to email you after you give them the required information.”

Unlike prescribed medicines, which have instructions clearly printed on the bottle, oxygen arrives with only a contract filled with hard-to-understand legal language. Doctors and nurses provide general direction, but they rarely inform users about what equipment is available, what Medicare will pay for, and what to expect.

After receiving her prescription, Jamie’s immediate need was for an FAA (Federal Aviation Association)-approved portable oxygen concentrator (POC) for an upcoming trip to visit family on the West Coast. Oxygen concentrators work by drawing oxygen out of the surrounding air, and portable models have batteries able to be recharged using an electrical outlet or a car’s battery.

Traveling by plane can be a problem for anyone with lung conditions, since air pressure drops as altitude increases. The resulting low air pressure reduces the amount of oxygen and also expands air trapped in the chest and elsewhere in the body (the cause of commonly experienced ear-popping). Airlines require that passengers needing oxygen use approved battery-operated portable concentrators and do not allow oxygen tanks.

“POCs have flow-rate limitations that some patients may exceed,” says Karla Schlichtmann, RRT, a respiratory therapist at Massachusetts General Hospital. “Currently, on the market, the highest continuous flow is 3 LPM [liters per minute], and the device weighs around 15 pounds. All the small POCs you see advertised are only pulsed-dose units, meaning they only give oxygen when you breathe in.”

A number of oxygen suppliers told Jamie that they could deliver a stationary oxygen concentrator within days, but not a portable concentrator. A manufacturer, who advertises nationally, said that shipping one to her would take a month.

“It takes a month?” Jamie recalls exclaiming. “This is a prescription for oxygen, it’s not like a tummy tuck.”

Since POCs are required for airline travel, some companies rent the devices through their “travel departments” or make them available for purchase. To have a POC in time for her travel, Jamie decided to rent the device at a cost of $600 a month. The rental fee was not reimbursable by Medicare, which considers travel a luxury.

For her next trip — England in the fall — Jamie began working well in advance with the same company to obtain a portable concentrator. A month before her departure, though, she still had no delivery date for the POC and ended up canceling her trip.

After that, Jamie found another company that promised to deliver a POC in a month. But because she hadn’t started oxygen within 30 days of her doctor’s order, Medicare required her to have another test to measure gas levels in her blood to prove oxygen was medically necessary and obtain a new prescription. Her doctor also had to write an order for Jamie to be evaluated for a conserving device — either a pulsed-dose tank or POC.

After a month passed, the supplier told her, delivery would take three months and then six months. At this point, Jamie sought help from her representatives in Washington, and received a POC promptly.

Medicare benefits for oxygen therapy are not straightforward. “A week ago, I ran into a woman pushing a shopping cart with an oxygen tank in it around a supermarket,” says Jamie. “She had been told that Medicare wouldn’t pay for a portable concentrator and asked if I had bought mine. I told her Medicare does pay for that.”

Indeed, oxygen and its related equipment fall under Part B of Medicare, which provides for outpatient medical needs. Oxygen suppliers receive one monthly payment from Medicare to cover the systems that provide oxygen, tanks that store oxygen, and accessories, such as tubing and nasal cannulas (prongs).

Suppliers must provide a portable option. Medicare lets the oxygen company decide which device — a tank or POC — you will receive. Because POCs are more expensive than portable oxygen tanks, almost all suppliers choose to offer only tanks. These tanks have to be refilled regularly at home from a supply tank. Longer lasting large tanks are available but are heavy and necessitate carriers with wheels. Medicare will only cover one portable option, so if someone acquires a POC, the supplier will take back any portable tanks.

“Before giving out a POC,” adds Karla, “oxygen companies determine if you have a stable oxygen requirement. If you are someone who is already on 3 LPM, qualifying for a POC is harder. If you are on 4 LPM or more, there isn't a machine, at this time, that can support you. They also look at whether you are using oxygen already. If you are only using one tank a month, or you rarely call for exchanges, it isn't cost effective to give you a POC unit.”

People are often unaware that, under Medicare, oxygen equipment is rented for a five-year period. “Nobody tells you that once you sign up with an oxygen company, you’re locked in for five years,” says Jamie.

For the first three years, Medicare pays the provider a monthly rental fee to cover oxygen, equipment, supplies, and maintenance. The user has to pay 20% of this rental fee, unless covered by a supplemental plan.

After three years, the user pays no more rental fees; however, the supplier still owns the equipment. The same company must continue to supply oxygen for an additional 24 months or as long as the patient has a medical need for oxygen. During this time, users continue to pay a 20% coinsurance if they use oxygen tanks or cylinders, or require equipment maintenance.

After five years, the user has the choice to renew the rental contract with the first supplier or to switch to a different supplier. He or she is also entitled to new equipment every five years.

A couple months after Jamie finally received the POC she wanted, she noticed the battery wasn’t holding a charge. “I wasn’t using it, and I noticed it gone from full down to 87%. So, I called the company, and they said they would get me another battery, because that battery was probably about five years old. You assume you’re getting something new when you’re not.”

Since stationary oxygen concentrators require electricity, oxygen companies need to provide at least one back-up oxygen tank for use in case of a power outage. People who live far from a medical center may want one or two larger tanks.

“If you live in an area prone to outages,” says Karla, “it is important to get a generator for backup as well as let the local fire department know you use oxygen.”

When asked how the situation could be improved, Jamie replies, “In a word: transparency. There needs to be information on what equipment is available, how to use it, what Medicare pays for, and about being locked in. When someone goes on oxygen, they need to be given a sheet of information, not legalese.”

“I really think it’s important to inform people so that they know what questions to ask,” she adds. “People should realize they have a voice and need to speak up.”

If someone has trouble understanding the medical information or is overwhelmed by the details, enlisting a knowledgeable family member or friend to act as another “set of ears” may be helpful.

Clearly, better coordination of home oxygen care with health care professionals and insurers is needed. Congress and the Centers for Medicare and Medicaid Services also need to consider a more flexible system with new methods of payment for oxygen suppliers and giving more rights to patients.

From the Perspective of Patients and Caregivers Blog