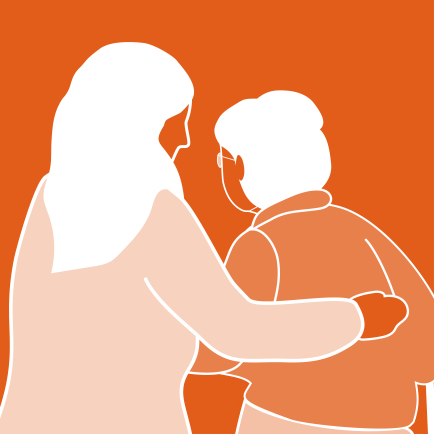 Theme:
From the Perspective of Patients and Caregivers
Posted By:
Aliaa Barakat PhD

When doctors diagnosed 63-year-old Mariann Rosa with idiopathic pulmonary fibrosis (IPF), the lung disease was completely unknown to her and her family. But Lindsay, her daughter and only child, made it her mission to learn all she could about the lung-scarring condition and to support her mother in every way possible.

Lindsay thought of her mother’s role as offense and hers as defense. “It’s your job to focus on feeling okay,” she remembers telling her. “It’s my job to make sure you have the tools to feel okay.”

She delved into difficult-to-read information and researched the limited treatments available. “Doing research is hard,” she says. “The literature is very technical with a lot of big, scary words. And it’s disheartening, because it says death is inevitable, usually within five years of diagnosis. But being able to attack the situation with knowledge and talk about the treatment options gave me peace of mind.”

In March of 2017, Mariann was hospitalized for a week with pneumonia at HealthAlliance Hospital in her hometown of Leominster.  But her doctor suspected something might be going on in addition to the infection and referred her to a pulmonologist, a specialist in lung disease.

For many months, Mariann underwent breathing tests and physical exams to rule out other possible lung diseases. Finally, at the end of August, doctors performed a biopsy (removing a small sample of lung tissue under anesthesia) that revealed IPF. A long recovery from the procedure forced Mariann, a first-grade teacher in Leominster, to miss the first month of the new school year.

The discovery of the progressive lung disease was totally unexpected. “This was off our radar,” says Lindsay. “It’s not something that runs in our family.”

After losing her father to liver cancer 14 years earlier, Lindsay was determined to be her mother’s primary caregiver and biggest advocate. She questioned care providers about possible treatments she had read about during her research:  Was her mother a candidate for pulmonary rehab or oxygen therapy? Could she take one of the two FDA-approved oral medications shown to slow the progress of the disease?

“I think one of the worst things you can do is go into medical appointments and not have questions,” says Lindsay. “Being an advocate means asking the right questions, getting a plan in place, and being prepared when something doesn’t go according to plan.”

Mariann’s doctor prescribed supplemental oxygen to help her breathing and the anti-fibrotic drug Ofev (nintedanib). Before starting the medication, she met with a pharmaceutical representative to go over its use. Lindsay prepared a long list of questions for her mother to ask about possible drug side effects and interactions with over-the-counter vitamins and supplements.

A Turn of Events

On Saturday, March 25, 2018, Mariann was out with friends for the evening when she suffered a heart attack. While struggling with her arthritic knees to climb a flight of stairs, she abandoned the cumbersome oxygen tank she’d been wearing. At top of the stairs, she was so short of breath that she collapsed and went into cardiac arrest. Luckily, her friends immediately called 911 and started chest compressions. An ambulance took Mariann to the emergency room at the Leominster hospital. At 3 a.m., Lindsay received a call saying her mother had been admitted to the Critical Care Unit (CCU).

Mariann spent the next two weeks in the CCU with a breathing tube in her airway. After its removal, she was put on supplemental oxygen and a ventilator, and moved to a regular medical floor. But the first night there, her oxygen plummeted due to a fluid build-up in her already compromised lungs caused by kidney failure. She was rushed back to the CCU and intubated again.

Two days later, on Tuesday morning, Mariann, her sister Shirley, and Lindsay met with the pulmonologist, nephrologist, and attending physician in the CCU to discuss the next steps. Still intubated, Mariann managed to communicate by writing, hand signals, and facial expressions.

Lindsay asked questions about every system in her body: “I knew her kidneys weren’t functioning, but did the cardiac arrest affect her brain or damage her heart? I asked about the worst-case scenario, which at the time, the doctors said would be that she would be released to a rehab facility while still on a ventilator.”

On Thursday, Mariann underwent a tracheotomy, surgically opening a direct airway to avoid damage to the vocal cords or esophagus that can be caused by prolonged intubation. Lindsay, who had researched intubation and tracheotomy, was aware of how potentially dangerous the situation was. In fact, the next day, problems with the tracheotomy tube necessitated a repeat of the surgery, during which Mariann’s heart stopped, but she was revived.

Over the weekend, Mariann, remarkably, was able to enjoy visits with a number of relatives, and nurses talked to them about rehab facilities that she could be discharged to. But Monday morning, Lindsay got a call from the hospital saying to get there fast; her mother would not last long.

Mariann died on April 16 during her school’s spring vacation. Yet the news traveled fast among staff, parents, and students. Her young first-graders, whose class picture had adorned her hospital wall, took the news really hard, says Lindsay.

An Offer of Support

“Unfortunately, I was looking for a support group for caregivers and found the ILD Collaborative too late,” says Lindsay. “But I want to continue my mission in my mom’s honor. I will feel better if I can help one other person to be more aware, better educated, or more prepared for appointments or setbacks.”

From the Perspective of Patients and Caregivers Blog